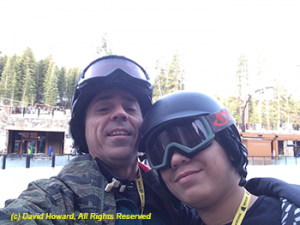 Save Our City! Alameda was founded in 2008 in response to outsized-development plans for Alameda Point that were beyond the capacity of the transportation infrastructure of the island. The building of thousands of homes at the former naval base, without first expanding transportation infrastructure would impact thousands of Alameda residents who must leave the island for work each day. The plan would have made everyone late for work in the morning.

Alameda voters overwhelming rejected a February 2010 ballot measure on the project, with over 85% rejecting the plan. (After the defeat at the ballot box, the developer, in a rear-guard action, adopted David’s proposal, elaborated in a 2007 whitepaper, to leverage the statewide density bonus law to build more affordable housing at Alameda Point. However, it was too late for the developer which had irreparably damaged its relationship with city officials and the Alameda electorate.)

In 2008, David surfaced and publicized the existence of almost $4 million in redevelopment pass-through funds intended for Alameda schools, but held by the City of Alameda, pressuring the district to demand the funds from the city for capital improvements for schools. The school district prevailed.

In 2011, David surfaced and publicized illegal political contributions from the non-profit Alameda Boys and Girls Club to then-Mayor Marie Gilmore’s campaign; Gilmore was forced to return the funds.

In 2015, David surfaced the existence of several hundred thousands of dollars of public access television funds for government and educational programming held by the city of Alameda. The school district was then able to pursue acquisition of those funds to expand it’s broadcast media pathway career program.

In late summer, 2016, David brokered a deal between City of Alameda officials and homeless people encamped at the former Belt Line Railway property to deliver a dumpster to the site so the campers might clean-up some of the accumulating garbage.

Preferring independent thinking to political party dogma, David is registered as a decline-to-state-a-party-affiliation voter. David’s highly effective communications style leaves his adversaries with little option to run from the issue and resort instead to ad hominem attacks.

David lives with his family in Alameda.