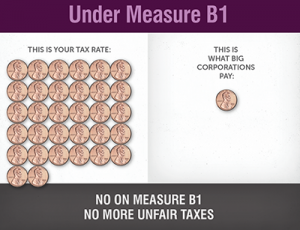 This is the mailer that many Alameda residents received in their mailboxes on Friday, October 21.


The school revenue lost due to the removal of the flat tax for empty parcels alone – a tax giveaway to corporate developers who own undeveloped parcels – is estimated to be $100,000.

The school revenue lost due to the 165 large parcels that benefit from the tax cap is likely in the millions – but the Alameda Unified School District won’t release the figures.

No on Measure B1 Mailer Page 1

No on Measure B1 Mailer Page 2