It’s a wonder nobody caught this before the election… Outgoing Alameda Councilmember Stewart Chen claimed to be elected to city council in 2012, when he was, in fact, not elected.

The City of Alameda even put the lie on its website, permitting his bio to say “He is currently a member of the Alameda City Council, being elected to the position in 2012.”

Lie on the City of Alameda website: “He is currently a member of the Alameda City Council, being elected to the position in 2012.”

But he was not elected in November 2012 – Stewart Chen came in third in a race for two seats on Alameda City Council, behind Marilyn Ashcraft and Tony Daysog who each earned sufficient votes to say they were “elected” to council.

Chen made it to city council not by an election of the voters, but by an appointment arising out of the language of the charter of the City of Alameda. In November, 2012, Rob Bonta was elected to the State Assembly, and vacated his seat on Alameda City Council. The city charter explicitly states then that the highest vote-getting councilmember in the election, who was not elected i.e. Chen, in this case, shall take the vacant seat.

Stewart Chen repeated the lie on his 2014 campaign website, saying he was “elected” to city council. 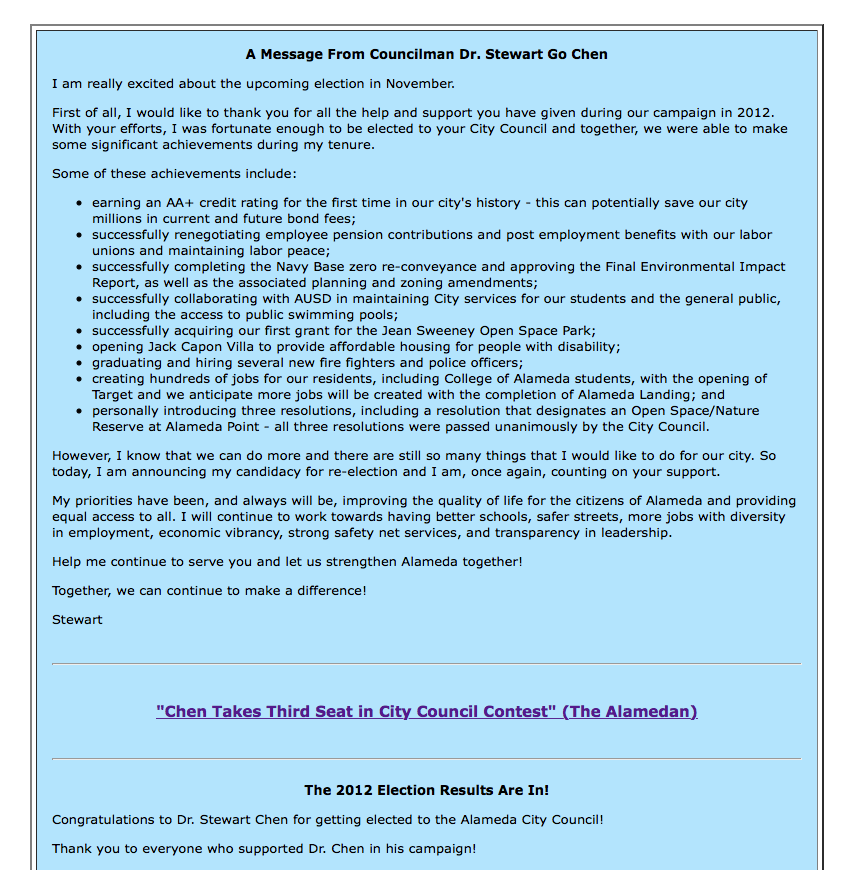 Sec. 2-7. Every vacancy in an elective office, arising otherwise than as provided in Article XX, shall be filled as follows:

(A) Vacancies caused by the election of a Councilmember to the office of Mayor shall be filled by the candidate not elected for a contested Council seat who received the highest number of votes, provided said candidate received votes from at least 10 percent (10%) of the total number of voters.

(B) Vacancies occurring within six (6) months of any election shall be filled in the same manner provided by (A).

The very definition of the process by which Stewart Chen rose to Alameda City Council in 2012 says that he was not elected.

Stewart Chen has been lying since 2012 about being elected to Alameda City Council.