In 2004 critics of Measure C, the $63 million tax bond measure that Alameda Unified School District, correctly predicted that the total repayment amount, including principal and interest, would grow to almost $200 million.

Of course, that’s exactly what happened, due to the school district’s use of so-called capital appreciation bonds, which defer interest repayment for years.

Since 2004, capital appreciation bonds have become notorious for burdening school districts up and down the state of California with crushing debt. You can read about it here.

In one of her final letters to the community, in May of this year, former AUSD Superintendent Kirsten Vital acknowledge that taxpayers are still paying off that debt; they will continue to due so for decades to come. It’s a tremendous amount of ‘student debt.’

You see this debt expense on your tax bill, under ‘Voter Approved Debt Service – School Unified.’ 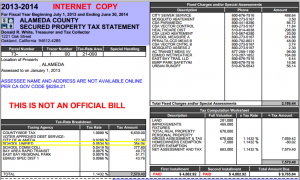 You can see how much you currently pay for the Measure C bonds on the left side of your tax bill.

You can see our summary spreadsheet of the repayments, based on AUSD documentation.

The school district has 17 school campuses for less than 10,000 students. The price tag attached to the facilities master plan came in at more than $600 million – Alameda families simply cannot afford to maintain this many school campuses.

Rather than asking Alameda students and their families to take on more debt, AUSD needs to consolidate its facilities.